i woke up early to catch my morning train ride back to new delhi.  i hailed an auto rickshaw infront of the hotel i was staying and asked the driver to drop me off at  agra cantt railway station. 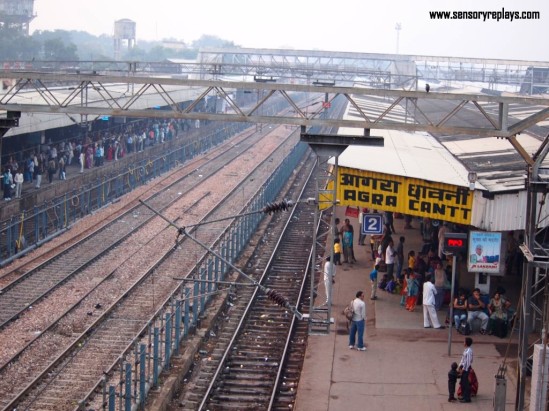 passengers were waiting for the next train when i got there. 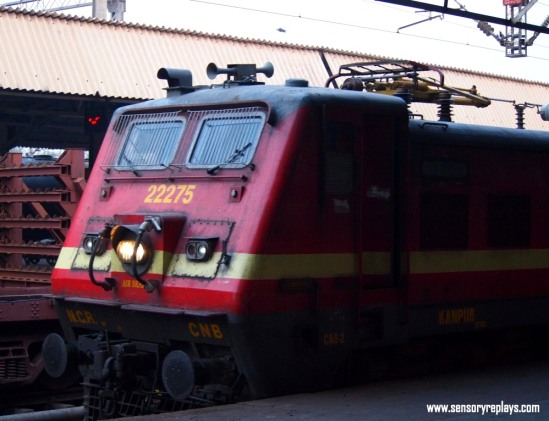 this is one of the trains.

these crows in the rail tracks were feeding on dead rats.  i was taking pictures of them when a man called out behind me. i looked at my back and saw that it was a middle-aged local man.  i backed out a little at arms length as a precaution.  he asked how was i doing and i said i’m good.  he then said – “are you taking dirty pictures?”  “what do you mean ‘dirty’ pictures?”  i asked him back.

he explained that tourists takes photos of dirty stuff and post it at the internet and tell the whole world how dirty india is.  he added that visitors should post nice things about india.  i was surprised of what he just told me and said from where i come from we also have dirty places – we also have dirty railway tracks.  i told him that it was the first time i saw crows feeding and it fascinated me so i took their pictures.  i smiled at him and said – “i went to india to see the taj mahal and it was beautiful”.

i was left with good memories of my solo travel to india – and that will never be a dirty picture.

there are a lot of tombs to visit in agra and I was able to see three of the well-known ones.

tomb of akbar the great 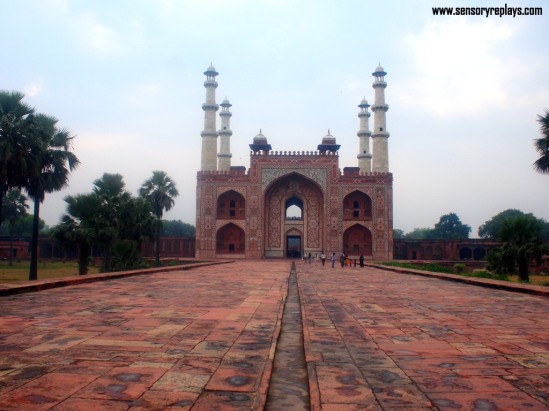 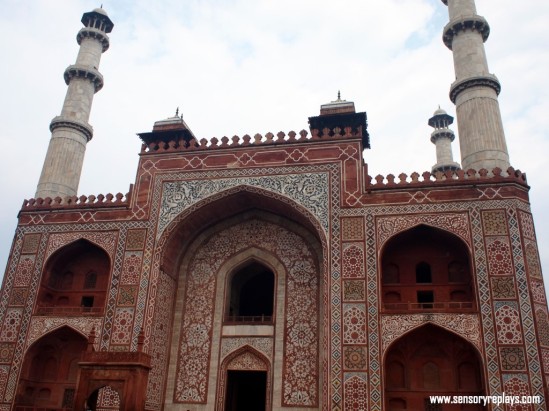 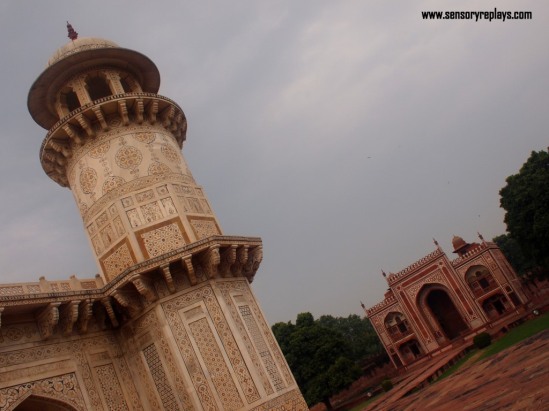 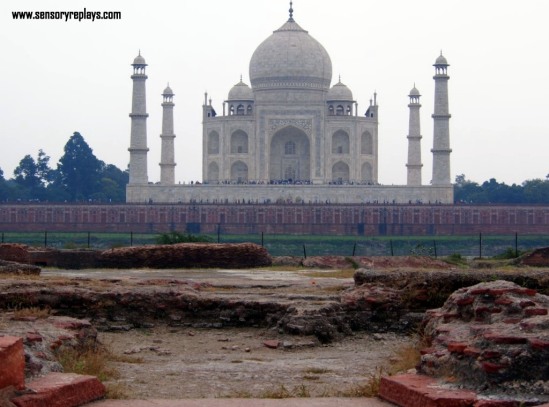 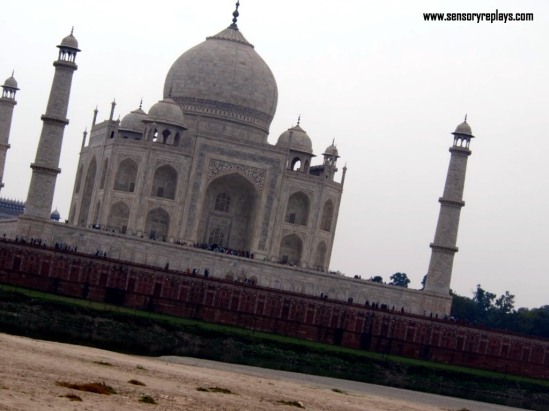 i took these last four pictures at mehtab bagh, which is opposite the taj mahal along the yamuna river and gives the mausoleum a different view.  it used to be a complex with a garden and fountains.  i was told that this site offers a good picture of the taj mahal during night time.

after my visit to taj mahal, I have planned to see agra fort which was part of my itinerary for the day.  I realized as I went out of the mausoleum that I used a different gate  and it was not the one where the tuktuk dropped me off early morning.  I found myself walking on narrow streets and not even knowing where to go.  for a few minutes I just kept on walking, occasionally a tuktuk will stop by my side and the local driver offering me a ride but I just sort of ignored them.  I then saw a  tuktuk stopped in a corner street and I noticed that there were already passengers inside.  I assumed it picks up passengers (same in philippines?!) so I approached the driver standing beside it and told him – “agra fort”?  he nodded and I added – “how much”? he said “10 rupees”!

I then told him “noooo special! I go with them!” ( as I pointed a finger at the guys cramped inside his tuktuk.)  he looked surprised, I asked again how much and he blurted out – 2 rupees!  it was fun bargaining, it’s really not because I wanted to save 8 rupees but getting him convinced for me not to pay the “tourist rate” was a funny experience.  I then sat inside the tuktuk, took out my camera, positioned it infront of me and announced “picture”!!!” – and here’s the result. 😀

after a short ride with my new-found indian friends I made it at agra fort.  the fort is a unesco world heritage site. 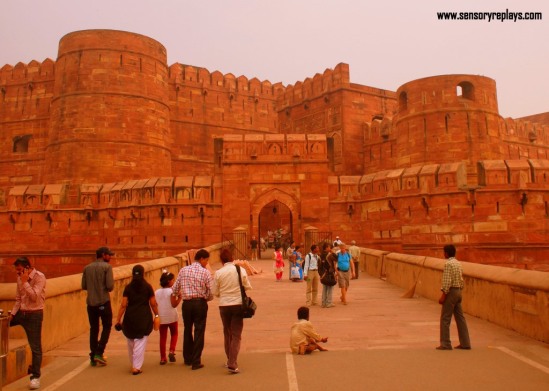 it wasn’t a friday so I have to pay the 50 rupees “pathkar” – whatever that is, hehe. 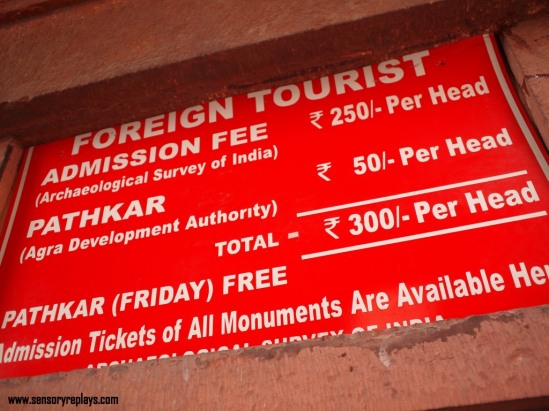 a welcoming structure at the entrance.

sometimes it also gets lonely being alone.

it shows here that part of the fort is under military occupation.

this is the hall of the public audience or diwan-i-am. 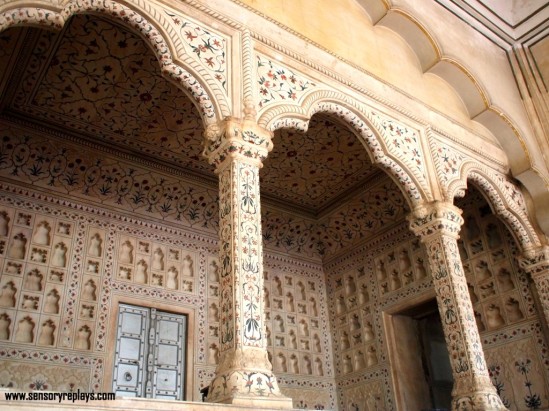 the octagonal tower, mussaman burj which actually offers a view of the taj mahal from afar.

macchi bawan, which used to have fountains, marble tanks and there were fishes.  also called as the fish enclosure – it’s all green grass now. 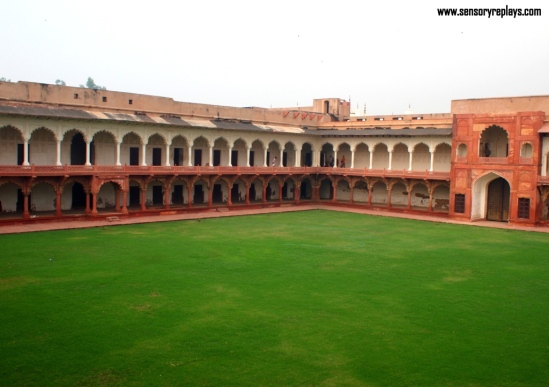