i’ve always suffered from motion sickness.  it was so bad when i was a kid to the point that i throw up.  until now as old as i am i still feel nauseated when i’m inside a vehicle that makes sharp curves on the road, or that occasional turbulence that i encounter during flights.   i think this was the reason that i avoided theme parks, for how will i call fun rides as “fun” when i dread to be on one of them?!

so another of my 10 things i have not done before list was to take a ride on a roller coaster.  when i was on my days off last march, i invited my parents and my siblings at enchanted kingdom.  actually, i went beyond on just riding one.  out of my pumped-up adrenaline, i managed to try their drop tower ride, ekstreme, where it raised us up at 150 feet in the air sending a flock of butterflies in my stomach.  i was just waiting to faint as it suddenly dropped without warning! 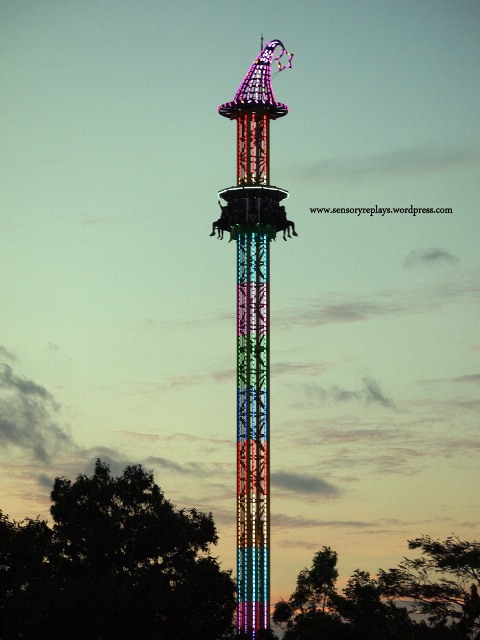 after surviving the drop tower ride, me and my brothers immediately went to the roller coaster ride, space shuttle max.  still feeling woozy, my blood was pumping as i sat on one of the seats.

space shuttle max is an inverted version of the vekoma boomerang coaster that consists of a single train with seven cars, capable of carrying 28 passengers.  the ride begins when the train is pulled backwards from the station and up a lift hill, before being released. after being released, the train passes through the station, enters a cobra roll element (referred to as a boomerang by the designers), then travels through a vertical loop.

to show as proof, here is an embarassing picture of me “screaming like a bitch”, hahaha!   as i experience my first roller coaster ride.

i felt terrible afterwards.  will i do it again?  never. 🙂