as much as possible, i never whine about the food i eat here at the rig but imagine yourself eating the same prepared food every other day seems unbearable.  the thing is, i cannot complain for the only thing i eat is fish and seafood (i practice pescetarianism) and our catering’s food supply is limited.  people here don’t like eating fish – everyone are carnivores!

.. maybe i’m just missing my ma, i miss her home-cooked meals back home.

i really did not want to talk about it, but my therapist friend advised me to do so for it can help me a lot.  i told him then and he was right, in some way it helped me ease through that feeling i was having.  after a week of that tragic accident in my workplace i thought i’ll put in my blog what had happened.

i was awaken by loud pounding on my door, as i opened it i knew something was terribly wrong.  oscar, our derrickman was screaming “patay si mathew!” (“mathew is dead!”).  my heart was racing as i hurriedly put on my pants and my work boots and proceeded in my clinic which is in front of my room.  my hands knew what to take with me then i ran towards the rig.  i was midway going up in the stairs when i saw the driller and some of the crew with the stretcher going downstairs, with mathew on it.

it was like a silent movie, in slow motion.  i looked at jeff, the driller, our eyes locked for a moment and i clearly understood what his eyes meant – mathew was gone, i felt tears welled up in my eyes as they carried him down.  i remember the practice stretcher drills that i regularly conduct with the crew at the rig floor, but this time it was for real.

we rushed him to the rig clinic, on the way i saw blood on his face and an open wound below his chin.  head and neck trauma.  he was unresponsive, no breathing.  i checked for pulse, nothing.  i started cardiopulmonary resuscitation with the aid of an automatic external defibrillator.  i did rescue breaths and  chest compressions – i rechecked for a pulse.  nothing.  i did this several times.

as we were on our way to the hospital, inside the ambulance i prayed to god, still hoping . . but i knew mathew was gone.  he was pronounced dead at the hospital.  the doctor told me he has been dead a few hours already and very likely died on the spot.

i felt so weak.  on the way back to the rig,  questions were running in my mind . . were there other ways that i could have done to save his life?  should i have done better? i did what i can, what i am capable of, was that enough?  then came in the question – do i really want to do this job?  can i still continue doing this?

i had a few days of sleepless nights, of waking up in the exact hour when i was awaken when the accident happened, of graphic images that haunted me.  lately, i have started to move on, returning on my usual self.

personally, i see  that the drilling rig is not exactly the right place to practice my chosen profession and to fully hone my skills as a paramedic, but i know there will come a time that i will really have the given opportunity.  i can wait.  for now the rig needs me so i will stay, temporarily. 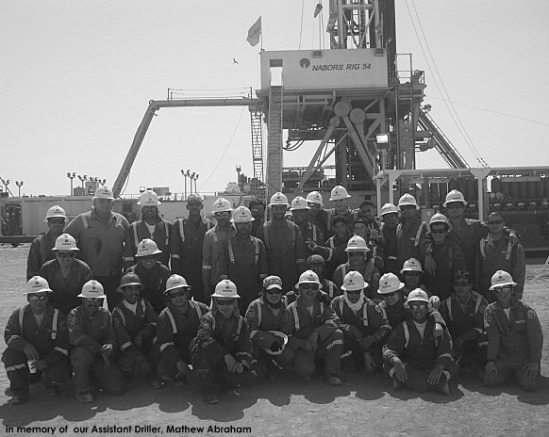 we just had a rig fatality yesterday – only four days after having one year of no lost time incident on our rig, one good co-worker is now dead.